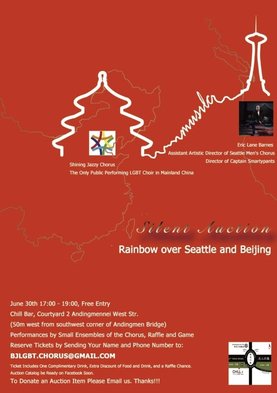 in June of 2013 I spent two weeks in Beijing working with The Beijing Queer Chorus. At that time they were named The Shining Jazzy Chorus, and were China’s only LGBT chorus. It was an extraordinary experience. I helped them organize their first chorus retreat, worked with them on repertoire, helped them prepare for a concert and auction, brokered a meeting with then-US ambassador Gary Locke and facilitated discussions on organization structure, audience building and long-term planning. In our time together we had dozens of fascinating and eye-opening discussions about the differences between the US and China and how LGBT life shows up in each. We were all struck by both the similarities and the differences between our two cultures.

One night during the retreat I gave the Beijing Queer Chorus a crash course on LGBT history in the US; there were many years of events in the West they were not aware of due to the media blackout put in place by the Communist Revolution in 1949. For instance, they had never heard of the Stonewall Riots. (They also hadn't heard of Frank Sinatra, which came up when we were rehearsing 'Something Stupid.' But that’s a different story) After I finished this impromptu history spiel the director said, ‘I wish we had a Stonewall event in China.’ To which I replied, ‘I think you are are a Stonewall event.' So much was happening with LGBT awareness so quickly in China, it seemed, and the arts seemed to be central to it all. This prompted a whole conversation about how important it is to show up, and to be authentic. That to simply show up on stage as a lesbian or gay person can be a huge act of courage.

During a post-concert discussion one of the Beijing Queer Chorus members said to me, “We never really noticed ourselves until you came here.” She meant that they had simply gathered together to sing and sometimes performed in public, but without giving much thought to the fact that they were part of anything much bigger. Having someone from outside China come and spend time with them showed them a greater context than they’d previously seen. It wasn't any unique magic I offered, really, other than simply showing up and paying attention. During this discussion they began to see that they were participating in a growing global social movement that had been taking place for several generations. This began a system shift in their perspective: they began to see themselves as more than just a self-contained group, but as a potentially powerful instrument for lasting social change. It was at this point in the conversation that I began to think: I wonder if there might be a way to bring this chorus to Denver in 2016 for the next GALA Chorus Festival? I asked if they might be interested in attending the Festival. Their response was an immediate and resounding, "Yes!"

After returning from Beijing I received regular progress reports from the chorus. They found a regular rehearsal space through connections with the German embassy (which came as a result of the meeting Gary Locke); they implemented a system of section leaders; they have been in the process of developing both mission and a vision statements; they decided (as a result of talking through potential mission statements) to change their name officially to ‘Beijing Queer Chorus.’ Their membership continued to grow, slowly but surely. They even traveled to the neighboring city of Tianjin to help them form their own LGBT chorus. The Beijing Queer Chorus began to truly blossom.

I approached Robin Godfrey, the executive director of GALA Choruses (Gay and Lesbian Association of Choruses) if she and the organization would be interested in helping lay down the framework to raise funds to bring the Beijing Queer Chorus to the Festival in Denver. She was unflagging in her support of the project. Over the course of the next three years we managed to raise enough funds through individual chorus members' donations to bring 16 members of the Beijing Queer Chorus to Denver. They had numerous opportunities to perform: three performance sets of their own as well as musical collaborations with other performing choruses for a total of six public performances, with audiences ranging upwards of 3,000. Not only was it was a life-changing event for the Beijing Queer Chorus, it was a transformative moment for everyone who saw them perform.